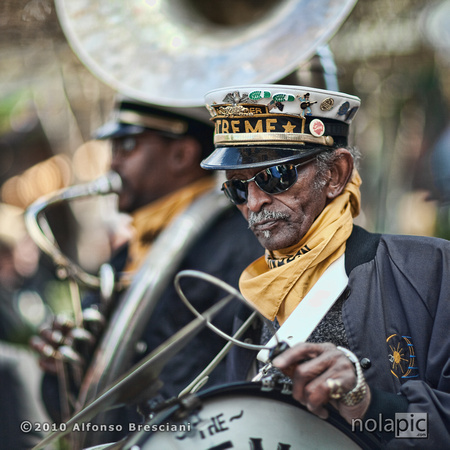 "Uncle" Lionel Batiste is a jazz and blues musician and singer from New Orleans, Louisiana. Born 1 February 1931, he began in music career at the age of 11 playing bass drum with the Square Deal Social & Pleasure Club. He is currently the bass drummer, vocalist and assistant leader of the Treme Brass Band; he is known for his kazoo playing as well. He also sings, and has recorded a cd as a vocalist.Besides inspiring younger musicians with his playing, he serves as a role model to many of them: trumpeter Kermit Ruffins calls Batiste his "total influence," saying that Batiste "taught [him] how to act, how to dress, how to feel about life." Internationally, Batiste has served as leader of the daily Moldejazz parade since 2000.
Copyright © nolaPIC.com
User Agreement
Cancel
Continue